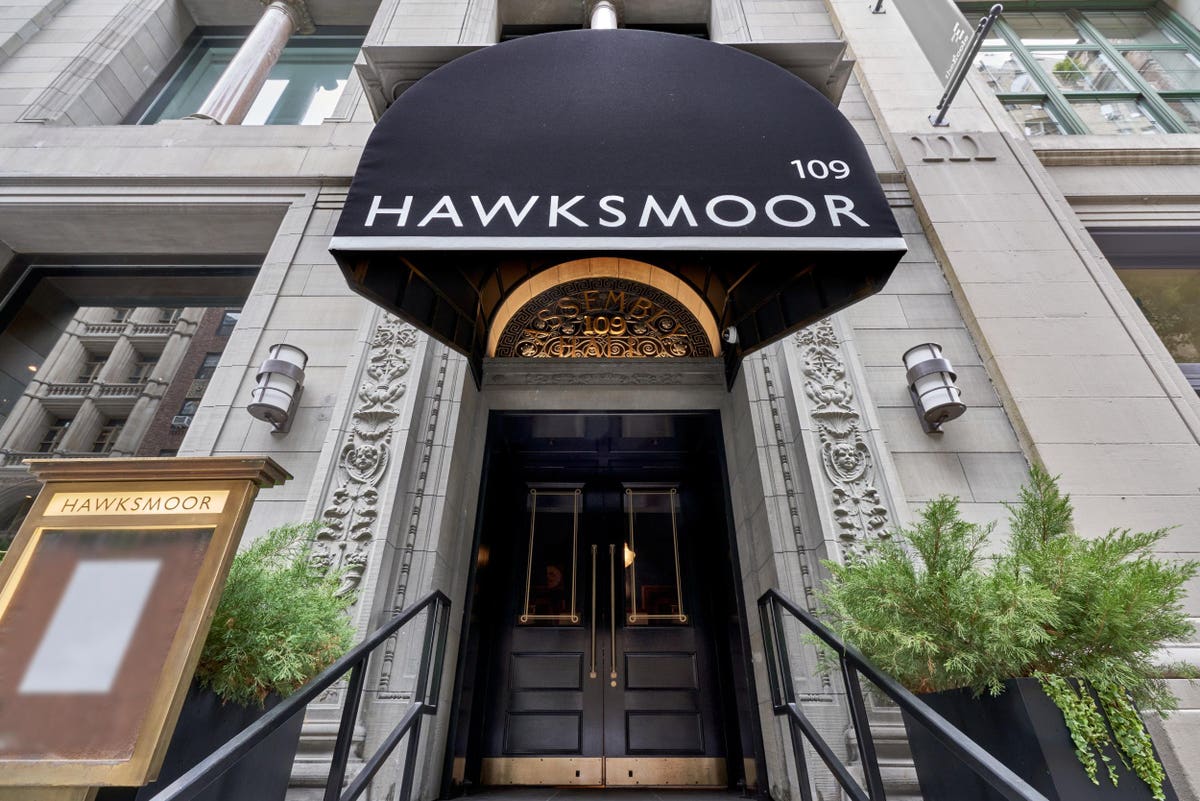 Overseas, many people are familiar with Hawksmoor’s steak houses since there are nine of them located there: seven in London with one each in Manchester and Edinburgh. But for its tenth location, it moved across the pond to open in New York City in September of 2021 in the Gramercy Park district on East 22nd Street.

But the transition to sourcing in New York City and adapting to American tastes took seven years in order to meet “dedicated ranchers, farmers and fisherman who share our values,” noted co-owner Will Beckett, who partners with Huw Gott. Half-kidding, he calls it “one of the longest periods in getting a restaurant off the ground.”

Over the course of these seven years, the two partners met with farmers, ranchers and fisherman to source the best beef, sustainable seafood and small-farm produce, both in upstate New York and out west. In the United Kingdom, it relies solely on British beef, but in New York, it “sourced all natural, dry-aged American beef,” Gott has noted.

A United Kingdom steakhouse Hawksmoor has opened in New York, trying to make a name for itself, and differentiate itself from a slew of long-standing competitors, mostly by how it prepares its steak.

Struck by the dynamic energy of the people and ambiance in New York City, Beckett said they saw succeeding in America as their next challenge. Thriving in New York, he says, “would be like scoring the winning goal of a cup final or throwing a winning touchdown in a Super Bowl.”

Of course, there are downsides to running a restaurant based in another continent. “As the Omicrom wave hits, it stretches my days dealing with an emerging virus in the morning,” he says.

But he likes the idea of “understanding Hawksmoor reimagined through a New York lens, understanding New Yorkers, the people who work there and the customers who come in.” He wants Hawksmoor “to learn from them and still stay true to itself.”

He describes the New York patron, compared to the English client, as “more direct. People tell us exactly what they want. ‘I want this table reserved every week at 7 p.m.,’” one customer told us.

In the U.K., wait staffs develop rapport with patrons, but New Yorkers are more about getting the task done, quickly and effortlessly, and rapport will often have to wait. New Yorkers are mostly in a rush and want to hear the specials, the minute they sit down to dine.

To respond to the different tastes of the New York City clientele, it offers veal chops, fried oysters, East Coast halibut, Reuben nuggets on the bar menu, and a lemon meringue bomb as dessert. But Beckett explains that the menus “don’t differ hugely, other than some different dishes.”

In terms of liquor, the British gravitate more to gin whereas in New York folks consume more whiskey and agave spirits.

Having taken over the space of the Assembly Hall of the United Charities Building, it strived for a more relaxed atmosphere. Beckett notes, “It’s a joy to see a couple dressed up to the nines alongside colleagues who’ve come straight from work, or a solo diner in shorts looking for a couple of drinks and a bite to eat.”

It’s also rather spacious. It seats 160 people, including its private dining room, and 45 at the bar.

In his New York Times review in late December of Hawksmoor, restaurant critic Pete Wells started out by noting the plethora of successful steak houses that populate New York including Wolfgang’s, Sparks and Smith & Wollensky and didn’t even mention Peter Luger Steak House. Do we really need another steakhouse was his implication?

But then Wells was won over. “The steaks Hawksmoor serves are not, in fact, all that readily available at U.S. steak houses.” He noted that they were grilled over charcoal, “which is what you might do in the backyard but not what happens in most American steakhouse kitchens.”

The cattle stem from small farms and are fed on healthier ingredients and “the flavor of Hawksmoor’s steaks is built into the meat,” Wells writes. He wasn’t thrilled with the side dishes however. He praised pastry chef’s Carla Henriques’ gateau of chocolate and hazelnut.

Charcoaling steaks is part of Hawksmoor’s signature, Beckett suggests. It can be costly because a restaurant needs to build a separate extract system to “pull the smoke out of the kitchen” and also needs to extract the gas. It can cost half a million dollars to develop it, “but for us, it’s non-negotiable. The open flame adds a huge amount and yields that smoky flavor,” he explains.

The 16-ounce steaks, which are in limited supply, will sell out, but the major cuts-porterhouse, T-bone, rump, do not.

Hawksmoor attracts a different target clientele than other steakhouses. “It’s not the classic steakhouse audience. We have tables of women, more racial diversity, younger people. Our audience is the food savvy New York crowd,” more like Danny Meyer’s and David Chang’s clientele, he says.

Beckett describes the three keys to its future success as: 1) Repeat business, which is critical to success, 2) Launching lunch next year, 3) Maintaining a reputation as attracting the right employees that fit Hawksmoor’s culture.

Dow Jumps 800 Points, Stocks Snap Three-Week Losing Streak After Inflation Expectations Ease
‘The system is rusty’: Executives defend industry as airlines cancel scores of flights
Could your flight be cancelled? Check our timeline of summer strikes and disruption
The World’s Best Scotch Whisky—According To The 2022 San Francisco World Spirits Competition
Congrats, Clif Bar! Its Sale To Mondelez Boosts Our View That This Is ‘The ESOP Decade’