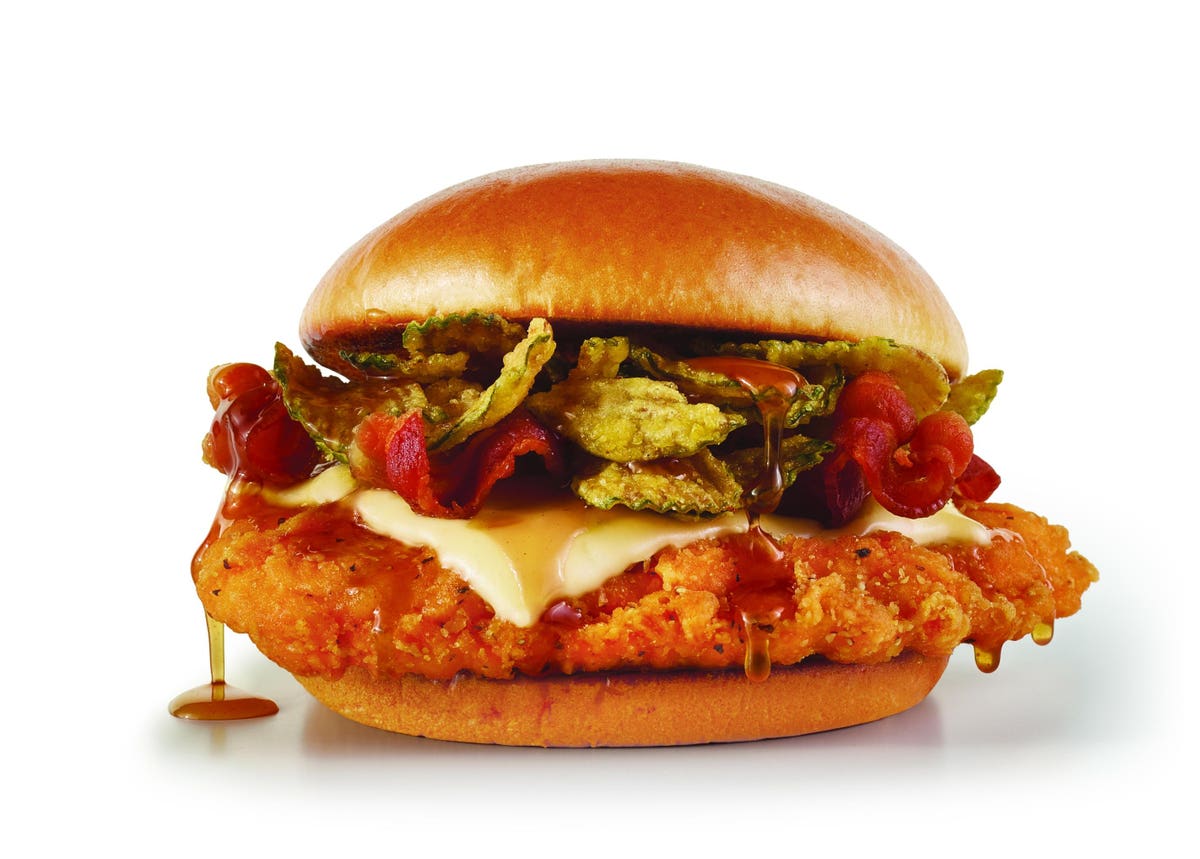 At this point, it’s safe to say most brands have a “signature” chicken sandwich to compete in the intensely competitive category ignited by Chick-fil-A and bolstered by Popeyes.

Those sandwiches have generated sustained success throughout the past couple of years, illustrating a consumer set that’s not even close to getting tired of such options. Fortunately for those consumers, the innovation wheel in the quick-service segment never stops and so it only makes sense that we’re starting to see some chicken sandwich iterations.

“It’s got the right balance of heat with sweet without being overpowering. The pickle chips add some textured fun,” he said.

“It hits our pillars. Its fresh and real, forward-leaning but not too niche, and we’re doing it all at an affordable price,” he said.

That “forward-leaning” piece can be attributed in part to the rising demand for hot honey. Menu instances of hot honey grew by 187% between 2016 and 2020, according to QSR Magazine, as consumers crave more heat and spice in general.

Hot honey began proliferating in the pizza space a few years ago, but has since only been translated elsewhere sporadically. Li said Wendy’s launch “democratizes” the offering.

“Hot honey is good on pizza, but it’s a heckuva lot better on chicken,” he said during a media presentation Wednesday.

Notably, Wendy’s spent about two years creating its own hot honey, choosing jalapenos as a base because of its “fruity kick.” The chain will offer a dip cup for guests who want to punch up the heat even more.

During that visit to the company’s headquarters, Wendy’s CEO Todd Penegor said the Made to Crave menu is intentionally approached to be different than traditional limited-time offers.

“In the old days, our innovation was driven by an LTO that would be on the menu for four, five, six weeks and then consumers would disengage,” he said. “We wanted to play a different game than innovation driven by [limited-time offers]. By putting exciting, new, premium products on our Made to Crave menu, we started to see customers trade up.”

During the company’s Q3 earnings call in November, Penegor added that the trade-up-focused menu differentiates the brand and drives margin as well.

“We’ll continue to play that game and it’s a nice mix lever and a nice high-level customer satisfaction lever with the high-quality food to allow folks to get something they can only get out of Wendy’s,” he said.

Wendy’s is also extending its hot honey chicken platform to the breakfast daypart as the company works to build that fledgling business. The hot honey chicken biscuit is an iteration of the brand’s honey butter biscuit, which Li calls a “workhorse” because it sells so well during the morning.

Penegor called breakfast a $1 billion opportunity if the daypart’s sales mix gets to 10%. During the company’s last reported quarter, breakfast was just under 8%, which he called “a good position” as consumers have yet to fully return to their morning routines. Wendy’s plans to continue ramping up breakfast by filling in menu gaps, such as beverages. This hot honey biscuit should help with another goal–driving trial and awareness.

“Our three-year journey is to drive this habit. We’re going to be in this for the long run. We know our food is superior to our competitors. We see it in the research and repeat visits are strong when we get that trial,” Penegor said.

The potential is, indeed, huge in the morning, as evidenced by Wendy’s biggest burger category competitor, McDonald’s.

“About one-third of business at McDonald’s comes in the morning. Where does this go for us? We’ll have to see,” Penegor said. “A big proof point for us is we’re at 7.5% [mix] in the worst of times. It’s super accretive and profitable. We think we can get to 10% by the end of [2022].”

Wendy’s relaunched its breakfast menu with simplicity in mind to make sure its franchisees could add the daypart seamlessly with limited labor and without complicating operations. Now that it’s experiencing accretive growth, the company is ready to “start innovating,” Penegor said.

During Wednesday’s media event, Li expressed confidence that Wendy’s is differentiated enough to win in both the breakfast and (increasingly crowded) chicken categories.

“We have the credibility … We own flavor and innovation on chicken,” Li said.