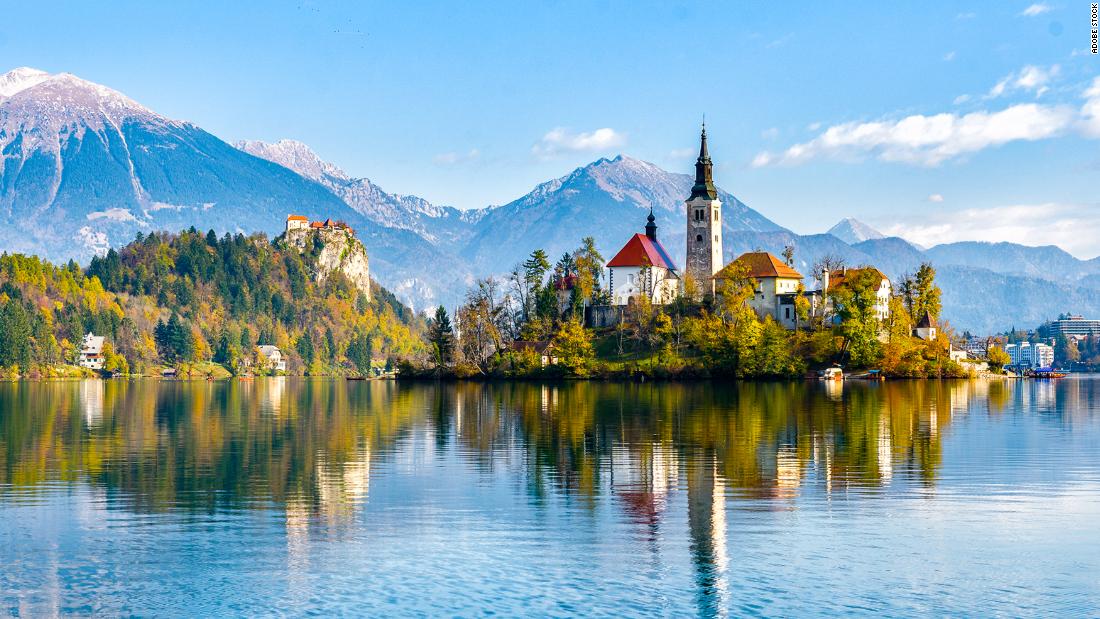 (CNN) — Think of Slovenia’s Julian Alps and two images often spring to mind — the fairy-tale sight of Lake Bled and, if you’re a winter-sports fan, the ski slopes of Kranjska Gora.

But this alpine region tucked into Slovenia’s northwestern corner is packed with natural wonders, many of which are contained within the country’s only national park, Triglav.

Since 2019, it’s been easier to get to know this region thanks to the creation of the Juliana Trail.

This 168-mile circuit winds through the foothills of the Julian Alps over 16 stages, beginning and ending in Kranjska Gora. (The trail also hives off into four more stages covering an extra 37 miles south towards Nova Gorica.)

Along the way you’ll be treated to spectacular landscapes of towering peaks, waterfalls, rushing rivers and pristine mountain lakes.

It’s possible to pick and choose among the stages, or treat yourself to a few weeks of slow exploration.

Here are some of the highlights.

The poster boy for Slovenia tourism looks like something Walt Disney wishes he had dreamed up.

Glassy turquoise waters surround a tiny island — complete with a baroque church set among pines — and the romance factor goes up a few notches when you arrive there on a traditional wooden boat called a pletna.

Loftily perched on a cliff overlooking the lake is Bled Castle, a medieval fortress that adds even more romance to the scene.

When not swimming in the lake (nicely warmed by thermal springs), visitors can go paddle-boarding or just wander along the four-mile path around the lake, soaking up those incomparable views.

At the southern end of Triglav National Park, the Tolmin Gorges slice through some of the Juliana Trail’s most dramatic scenery.

There’s something almost primeval about these forested limestone walls looming over the Tolminka River, with deep green waters rushing below along the rocks. At the lowest point in the national park, at 590 feet (180 meters) above sea level, there’s a confluence between the Tolmin and the Zadlaščica which you can access via rocky steps and picturesque wooden bridges.

Slovenia’s largest lake certainly gives Lake Bled a run for its money in the beauty stakes.

Follow the footpath that winds around the lake before taking the cable car that whisks you up more than 5,000 feet to the Vogel ski resort.

From here, the views of Lake Bohinj are quite breathtaking.

Savica Waterfall: The source of the Sava Bohinjka River.

Just a couple of miles to the east of Lake Bohinj is one of Slovenia’s loveliest natural attractions and worth a detour.

Savica Waterfall is the source of the Sava Bohinjka River, and it thunders through a deep crevasse from a height of 255 feet into brilliant emerald-green waters.

Take the marked trail from Zlatorog Hotel in Ukanc for about an hour until you reach the rocky steps that lead to the waterfall. There’s a café nearby for a convenient pit stop.

If you’re following the Juliana Trail in a clockwise direction, one of the final sights you’ll pass will be the Zelenci Nature Reserve.

It’s quite an arresting sight: a lake of bright turquoise surrounded by marshy swamps and, beyond, the mountains of the Triglav National Park.

Bubbling beneath are the springs of the source of the Sava River, giving the lake its jade color.

Raised wooden walkways lead you through this serene landscape past more than 1,000 species of wildlife, including sand lizards and the rare scarlet grosbeak bird.

Because the average temperature doesn’t dip below 41 F (5 C), the waters never freeze, even during winter.

Slovenia’s best-known ski resort has all the prettiness you would expect of an alpine village. And when the snow melts, that’s the cue to explore its mountain trails on foot or by bike.

In a country that has produced Tour de France winners, it’s not surprising that cycling is big business here. Ski lifts run during the summer too, giving downhill mountain bikers the chance to career down narrow tracks at breakneck speed.

At nearby Planica — home to one of Europe’s premier ski-jumping centers — you can fly through the air on the world’s steepest zipline descent.

For something gentler, pitch up on the shores of Jasna Lake, two connected artificial lakes at the confluence of the Velika Pišnica and Mala Pišnica streams.

The Soča River forms part of the Juliana Trail.

Follow the mind-bending twists and turns of the Vršič Pass from Jasna Lake and you reach the Soča Valley.

Part of the Juliana Trail follows the Soča River, one of the most exquisite in Europe, its impossibly clear blue-green waters a favorite with kayakers and rafters.

Along the way are some of Slovenia’s most magnificent waterfalls, including the mighty Boka and Kozjak, the latter dropping into a deep green pool of water.

While the region appeals to active visitors, history buffs will want to explore the monuments from the Soča (Isonzo) Front during World War I.

Strung out along a 143-mile path all the way to Trieste, the Walk of Peace is a poignant reminder of the many thousands who died here in battle during the conflict.

Hikers and climbers looking for a challenge will be tempted to deviate from the Juliana Trail and tackle the ascent to the summit of Mount Triglav.

This hulking 9,296-feet limestone peak usually involves an overnight stay and a good level of fitness — and it’s worth considering hiring a guide.

You can approach the mountain from several directions, but the two most popular routes start either in Lake Bohinj or Lake Bled.

Be prepared for a bit of scrambling when you get close to the summit, which is accessible only from June to October.