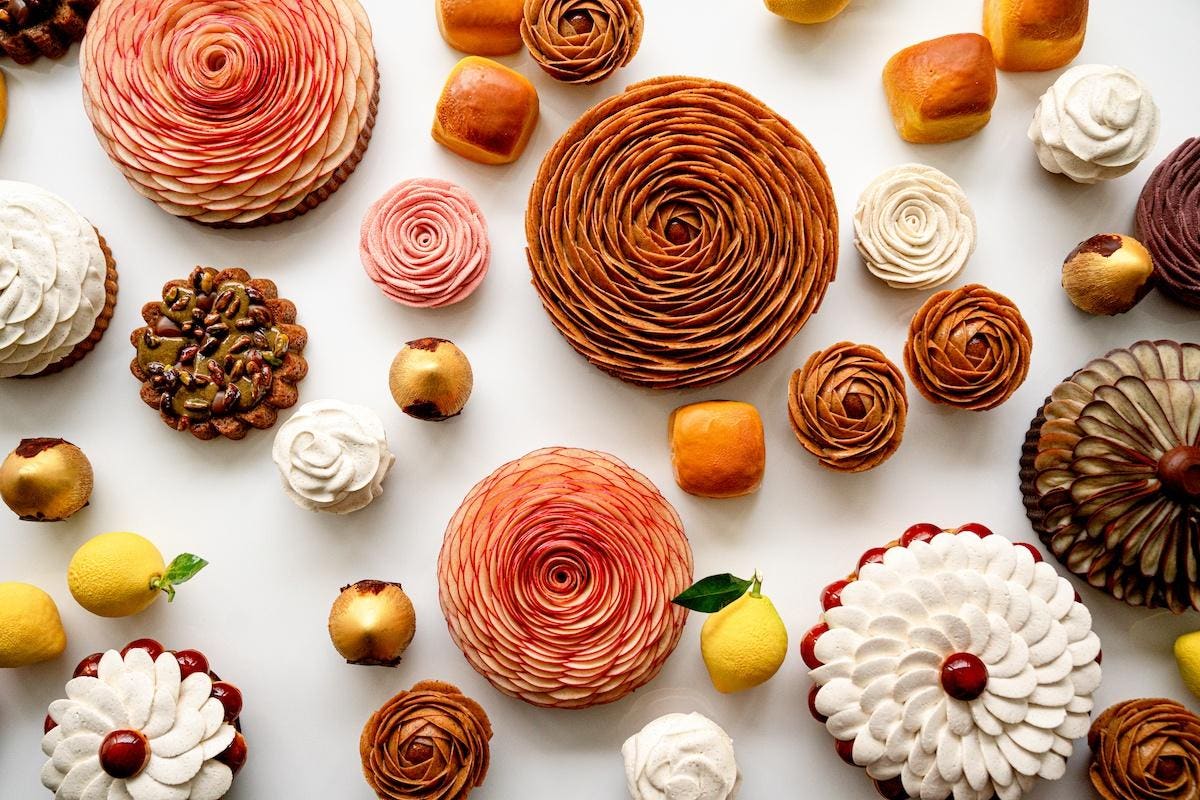 The man who makes the best cakes in the world has arrived in London. L’Expresse described Cédric Grolet as having “revolutionized the world of sweetness” and his list of awards is long and impressive. So, it’s no surprise that The Berkley hotel in London is thrilled that the young pastry chef chose to open his first patisserie outside of France with them: Cédric Grolet at The Berkeley. London, known for its innovative spirit and creative food offering, was the first city Cédric Grolet ever visited outside of France. He says that London “has always had a very special place in my heart and to open in this incredible city is a long time dream.”

Launched on Valentine’s Day 2022, Cédric Grolet’s world renowned creations, including his famous trompe-l’œil fruit and flower cakes, are available in the lovely new patisserie in Knightsbridge to eat in or to takeaway. And the setting is as chic as you’d expect, with gleaming white marble counters, pale pink leather seats and touches of gold, designed by renowned super yacht interior designer Remi Tessier. The patisserie has been designed as a high end pastry “lab” with polished stainless steel, white stone and a gold leaf gilded ceiling. A glass screen hangs over the central counter, engraved with gold. Chef Grolet’s global fanbase is vast. He’s considered the “rockstar of baking,” particularly in his native France, where customers happily queue outside his patisseries. With a string of accolades citing him as the best pastry chef in the world, Cédric Grolet is known for his trompe-l’œil artistry where realistic looking lemons, apples etc reveal hidden surprises within. And a special pastry has been created to mark the London opening – a trompe-l’œil scone especially for the Brits.”

Cédric Grolet at The Berkeley is located beside leafy Hyde Park, ideal for a post-cake stroll. It is open seven days a week selling the chef’s signature viennoiserie, cookies, cakes and patisseries, all made each morning fresh for the day, with a “once they are gone, they are gone!” policy. His takeaway La Pâtisserie du Meurice par Cédric Grolet sells out on a daily basis so London will likely follow suit. Grolet’s fruits and flower cakes will be sold together for the very first time in this new space in London. Currently, these creations are sold in separate patisseries in Paris. Both series of cakes are inspired by the seasons and have a very personal story: fruit played a part in Grolet’s childhood when he was given a piece of fruit as he set off to school each day and he picked fruit for pocket money at the weekends, while the flower cakes are inspired by his mother who used to tell him “that with a simple flower, you can conquer the world.” Alongside his fruit and flower cakes, i an exclusive for London: in his signature trompe-l’œil, Grolet and team have created an illusion of his favorite British cake – a classic scone, as a tribute to Britain.

Cédric Grolet’s work at Le Meurice in Paris with Alain Ducasse, the godfather of French cooking, was undoubtedly a vital source of inspiration. He says that Monsieur Ducasse is not a big fan of sugar and suggested cutting back the sweetness to focus on the natural taste of the ingredients as much as possible. Avoiding sickly sweetness and using local, seasonal ingredients are key aspects of every croissant and elaborate pastry Grolet creates. This goes for the London menu too, including tasty highlights like Petite hazelnut, Petite vanilla, Petite lemon and Petite Paris-Brest flower.

A highlight of the new venture will be an experience only available at the London location. While Londoners and tourists alike can take away the pastries, they can also book to sit at the Chef’s Counter where they can watch the pastry team at work and enjoy a menu of signature tastings – five sweet and one savory – and champagne.

The other dining in with Cédric Grolet experience is in an entirely new space in the hotel – The Berkeley Café, right beside the patisserie. This new all day dining spot offers two daily Cédric Grolet moments each day – petit déjeuner and goûter. For breakfast, guests can enjoy viennoiserie, waffles, crepes and savory signatures such as croissant benedicte. Goûter is the long-standing French ritual of sweet snacking. The menu features standout showstoppers from the patisserie including the London exclusive Scone, plus the Noisette and the Citron, Grolet’s best selling creations in Paris. And for à la carte, flower cakes and viennoiserie are featured, including Grolet’s multi-layered, dense chocolatey Pain Suisse. This menu is designed to be enjoyed with champagne, of course.

30 amazing family holidays that you can still book for this summer
The First Princess X95 In Southeast Asia Has Arrived
David Beckham Stars In Riva The Persuaders!
The Lake District’s ultimate family-friendly hotel just got even better
I LIVED HOMELESS IN THIS BUSH! – World Flight Episode 57