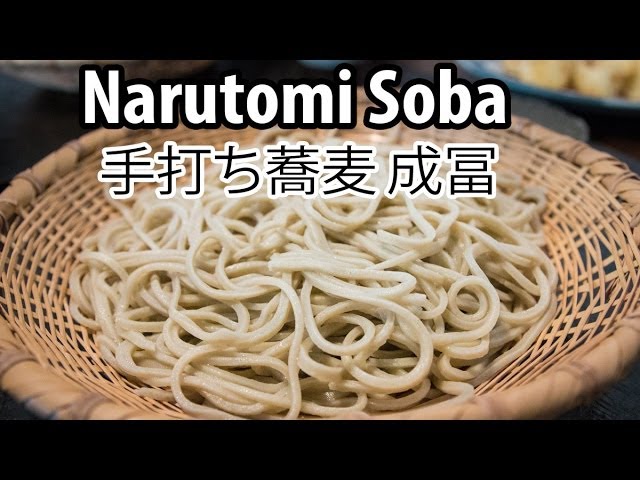 I had eaten Japanese soba noodles quite a few times in my life, normally from Japanese buffets or at cheap restaurants outside of Japanese. But along with eating platters of fresh sashimi and bowl of ramen, one of the things I wanted to do when I was in Tokyo was eat a read hand-made meal of soba noodles. As a recommendation from Yukari, a friend of mine, we decided to go to a restaurant known as Narutomi Soba (手打ち蕎麦 成冨) in Tokyo, Japan to sample their soba noodles, and I was thrilled.

We got there for lunch, a little before they were open, and we were the first ones in the door. The menu was all in Japanese, so it was a little difficult to explain what I wanted to eat. However, at Narutomi Soba (手打ち蕎麦 成冨) they really only specialize in soba noodles, but they do serve them in a number of different way. The waitress was very kind to us, sat us down, and despite no English being on the menu, she explained to us what we could order. I knew I wanted to get the dry version, known as seiro soba or mori soba (盛り蕎麦), and so we each got one of those. At Narutomi, they also specialize in traditional style tempura, and I accidentally ordered three plates, which made my bill a bit on the expensive side, but it was so worth it.

Anyway, our mori soba / mori soba (盛り蕎麦) arrived to our table within a few moments, fresh from the kitchen where the chefs had hand prepared them with extreme care. The soba noodles were presented beautifully on nicely decorated plates and with bowls and cups that our waitress explained originated from the Edo period of Tokyo’s history. Everything was beautiful. Since I didn’t know the exact proper method of eating the soba, our kind waitress at Narutomi (手打ち蕎麦 成冨) said we should first add the bit of wasabi to the dipping sauce, mix it up, and then dip our soba noodles into the sauce before eating. The noodles were absolutely amazing, cold and refreshing, and they were cooked all the way through, but still had some chewy texture to them. I could actually taste the passion in them, they were so delicate and so amazingly tasty, despite being quite plain, if that makes sense.

The tempura made the perfect accompaniment for our soba noodles, and I actually accidentally ordered (I didn’t really know they were so expensive when I ordered them) three plates of tempura – two scallop plate and one extra vegetable. The tempura was served in the old style, with a little plate of dipping salt instead of with the common modern dipping sauce. Again, it was extremely simple, but so good and so fresh. The vegetables were all good, but nothing compared to the giant scallop which was deep fried and meaty and sweet. It was absolutely stunning.

Though Narutomi Soba (手打ち蕎麦 成冨) was a little on the expensive side for lunch, I thought the food was unbelievably good and extremely high quality. Both the soba and tempura were so simple and plain, yet the care and precision of each dish is what made it shine. I can hoestly say this was one of the most simple yet most amazing meals I’ve had in a very long time. If you go to Tokyo and are looking for one of the best restaurants in the city to eat soba, make sure you check out Narutomi Soba (手打ち蕎麦 成冨).

How to get there
The restaurant is located very near Tsukijishijo Station, and you can walk there from that station. More details here: http://migrationology.com/2014/06/narutomi-soba-restaurant-tokyo/

Music in this video courtesy of Audio Network