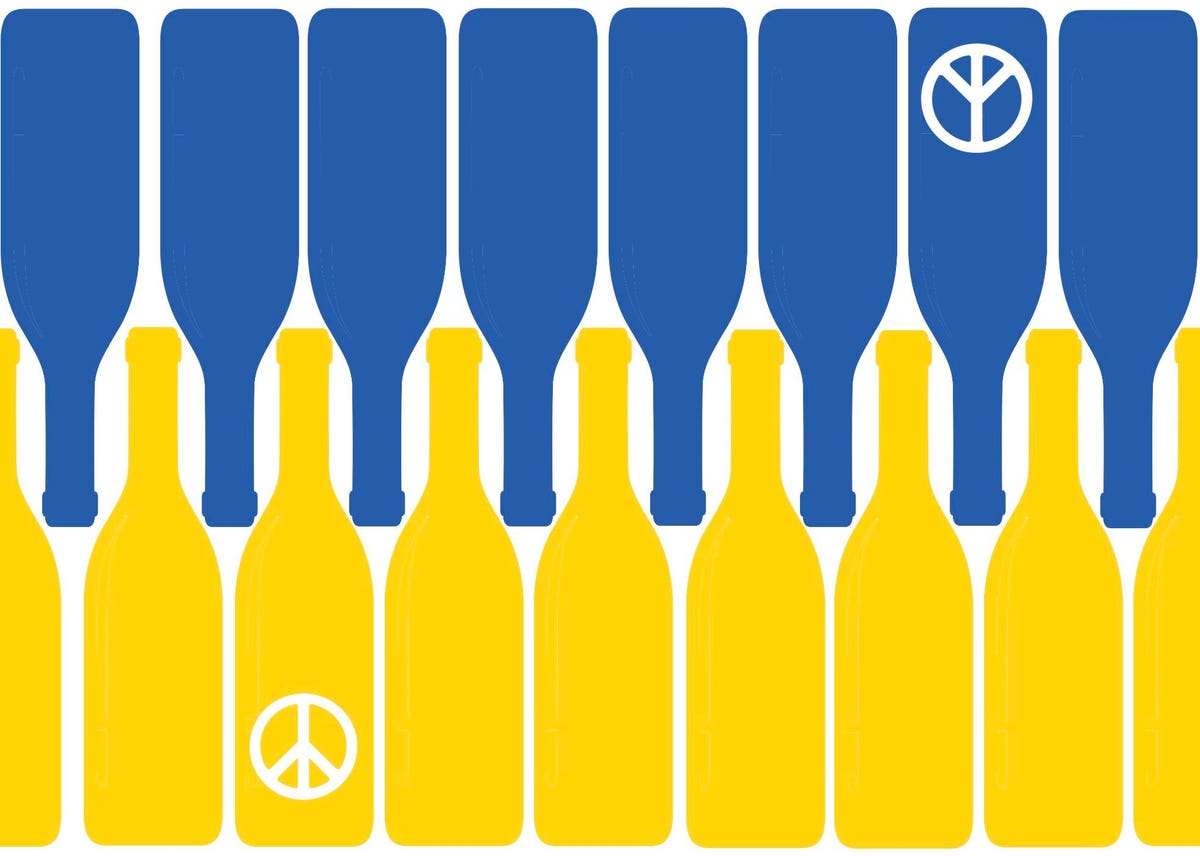 Much of the free world is standing by Ukraine as its leaders, military and citizens bravely battle for the country’s independence. Across the world’s business sectors, corporations and companies have signaled their support in various ways, from pulling back on business in or with Russia to grassroots campaigns helping with humanitarian aid. The beverage industry, too, has stepped up with statements of their own or creative ways to show support in tangible ways. Here’s a rundown of a few of those efforts:

In New York’s Finger Lakes region, the Dr. Konstantin Frank winery devoted weekend sales to Jose Andres’ World Central Kitchen, which has been on the ground in Ukraine and adjacent countries feeding those displaced by the war. It’s a cause that hits close to home: Dr. Frank, founder of the winery, emigrated from Ukraine, his own family having been refugees during World War II. His winery’s efforts raised nearly $42,000 over the March 4-6 weekend.

The Sonoma County-based Russian River Brewing Co. will produce a special golden ale, the sales of which will be dedicated to a Ukraine relief aid fund. The brewers responded to a fundraising appeal on social media from the Pravda Brewery in Lviv, Ukraine, which offered to send one of its own recipes to other in exchange for using it to raise funds for relief. Priced at $10 per can, Russian River’s brew will be released on March 25 and called Putin Huylo, a Ukrainian and Russian phrase that translates to “Putin is a (expletive that rhymes with brick).”

On March 11, Southern Glazer’s Wine & Spirits, a major alcoholic-beverage distributor based in Miami, announced it will match 100% of all employee donations made during the next 90 days to three organizations providing humanitarian aid in Ukraine: World Central Kitchen, United Nations High Commissioner for Refugees (UNHCR), and Cooperative for Assistance and Relief Everywhere (CARE).

The Decanter World Wine Awards, the largest—and one of the most prestigious—wine competition in the world, announced that it will waive entry fees for Ukrainian wineries that are able to participate. Further, it will cancel the entries for Russian wineries that have entered the competition, and their wines will not be judged

Numerous bars, restaurants and drink brands in the UK have created fundraisers for humanitarian aid, from #CookforUkraine and special cocktails events at top London pubs to a guided virtual whisky tasting with all proceeds flowing to Ukrainian relief. Others are branding cocktails or packaging with the colors of the Ukraine flag and tagging proceeds from sales for relief efforts.

From Feb. 24 to March 10, Royal Wine Corp., a New Jersey-based importer of specialty wines, whose Herzog family roots go back eight generations in Czechoslovakia, donated 100% of the proceeds of the sales of two vodka brands, the Ukrainian Xdar and the Polish Lvov (named for the Ukrainian border city, Lviv, where many Ukrainians fled in the past weeks). The donation was set be at a minimum of $30,000.

The Drinks Business reports that Asian drink companies are on the scene, too, with Japan’s Suntory Group donating nearly $800,000 to relief and refugee programs. The Daiichi Sake Brewery in the northern Tochigi Prefecture, released a “No War” 300-bottle, special-edition sake, which sold out quickly after its March 14 release. The brewery plans to produce more. Wolfgang’s Steakhouse in Japan will conduct a charity sale of Ukrainian wine in five venues, with partial proceeds for Ukrainian food support. In Hong Kong, the much-lauded Hemingway-inspired “The Old Man” bar is donating 100% of sales of select drinks on the take-away menu for humanitarian relief.

The French-based Association de la Sommellerie Internationale is launching an employment platform specially dedicated to helping Ukrainian refugees find jobs in the drinks sector. All job offerings/postings will be vetted by the association.

Among the numerous charity wine auctions underway is “Wine United for Ukraine,” headed by Masters of Wine Tim Atkins and Sara Jane Evans, and slated for online bidding April 1-3.

“Wine for WCK,” is fundraising project that supports Andres’ World Central Kitchen composed of wine societies such as the Comanderie de Bordeaux, the Comanderie des Cotes du Rhone, Societe des Amis du Champagne, Chein de Rotiseur, and Wine & Spirits magazine. The fundraiser will auction bottles in April via Acker, which notes it will donate the full premium on every lot designated for the relief effort.

iDealwine, the fine-wine auction platform, will conduct a fundraising auction in collaboration with Bordeaux’s Château Dauzac, which is spearheading the collection of wines to go on the block. The 10-day virtual auction will begin March 30, and the catalogue will be available for viewing online. All profits, including the buyer’s commission, will go toward the Ukraine Amitié association, and iDealwine will handle shipping to top bidders.

Crurated, a London-based wine club, conducted “The All Heart Auction” of rare wines March 14-20, partnering with more than 50 winemakers who contributed a pre-auction inventory value of $100,000. Lots included bottles from Biondi Santi, Cristal, Dujac, Giacomo Conterno, Salon among others. All proceeds are to be distributed to The Red Cross, Save The Children, UNHCR and UNICEF for Ukraine relief.

E-scooters were supposed to fix travel in Rome. Then they became ‘death traps’
What sitting in economy on Qantas’ 20-hour flights will be like
Current Foods Raises $18 Million To Accelerate The Expansion Of The ‘Beyond Meat Of Seafood’ Across B2B And Retail
Fresh Take: Lifeless Market For Meatless Meat, What Clif Bar’s Founders Will Net, And Kellogg’s Spinoff Strategy
David Beckham Stars In Riva The Persuaders!