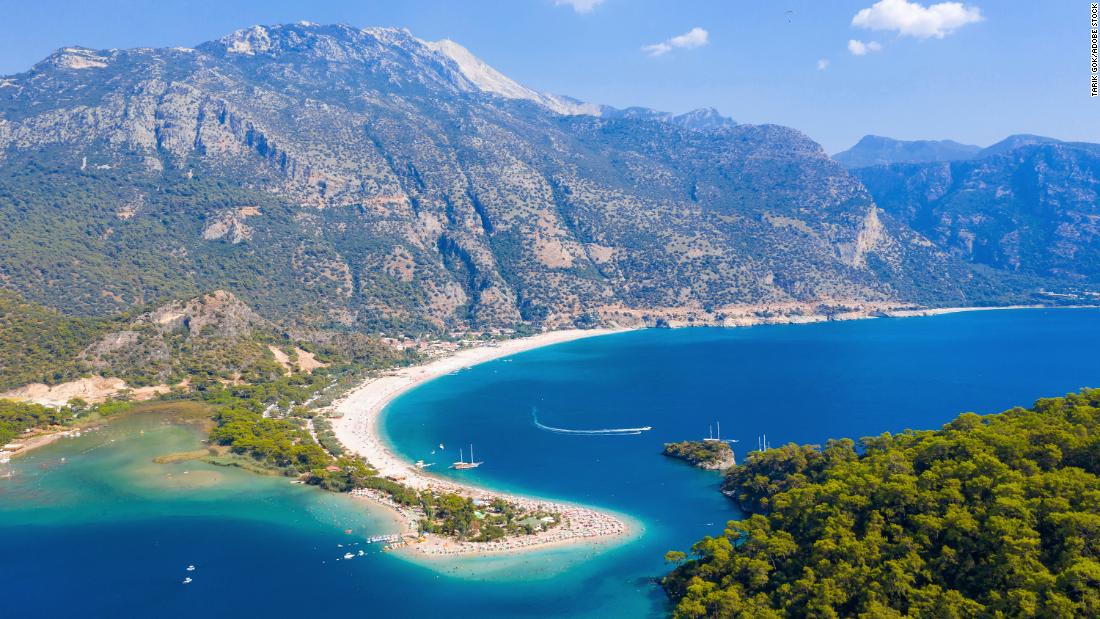 It passes through 25 historical sites, including the UNESCO World Heritage listed ancient cities of Xanthos and Letoon. And the full route takes 29 days to complete.

Don’t worry, there’s plenty of easy access to sun, sea and sand. Whether you’re a lounge-in-the-sun-all-day kind of beach goer, or a back-to-nature happy camper, there’s something to suit everyone.

All come with a backdrop of stunning towering mountains, the rustle of the wind through the trees and the allure of an endless expanse of clear blue water merging with the sky.

The Lycian Way is 335 miles (540 kilometers) of marked hiking paths on the Tekke Peninsula, stretching between Fethiye and Antalya on the southern Mediterranean coast of Turkey.

It covers an area once belonging to the Lycians, a democratic, highly cultured and independent people that inhabited the region from the Late Bronze Age through to the end of the Roman Empire.

They were ruled by the Persians, welcomed Alexander the Great, learned from Greek culture and were once a Roman province. By the time the Byzantine Christians came here to settle, the Lycians had well and truly made their mark.

Here are some of the route’s highlights.

At the western end of the trail is Ölüdeniz, a name literally meaning Dead Sea, except it’s anything but.

This crystal sheet of blue lagoon feeds into the Mediterranean, and even in the roughest of weather retains its hues of turquoise and aquamarine.

During Lycian times Ölüdeniz was known as the “land of light and sun” and on a hot summer’s day, with the light reflecting off the spit of sand forming Kumburnu at the mouth of the bay, it’s easy to see why.

The lagoon forms part of a national park so there’s a small entry fee to access the beach.

Once there, do as the name suggests — absolutely nothing with occasional dips in the water to cool off.

Alternatively, the more adventurous can admire the scenery on the way down from Babadağ — Father Mountain — with a tandem paraglide jump. At a height of just over 6,233 feet (1,900 meters), it’s not for the fainthearted.

Less than three miles away from Ölüdeniz is Kelebekler Vadisi, known as Butterfly Valley in English.

A powerful waterfall, with its source in the village of Faralya located at the top of the cliffs, cascades down the back of the canyon. This water forms a stream passing through the middle of the valley, emptying out into the sea in a spectacular play of teal and azure.

Home to 105 butterfly species, compared to most other beaches along the coast Butterfly Valley has little in the way of facilities, and that’s intentional.

In 1981 a co-operative bought the valley from the Faralya villagers. Their aim was to conserve its natural beauty, eschewing commercial development. Six years later the government declared it a national reserve.

Access is easiest by water. Tour boats anchor offshore for just a few hours each day and those wishing to stay overnight can use the shared taxi boat service from Ölü Deniz.

No permanent building is allowed so accommodation consists of tents, basic huts and bungalows.

Laptops, tablets and mobile phones remain packed away with the electricity switched on for a few hours at most. The focus is on nature. By day the silence is broken only by the lapping of the waves on the shore and at night by the crackling of the flames and bursts of laughter at BBQs and gatherings on the beach.

Next along the trail comes the ancient city of Patara. Patara dates back to the 13th century BC and became the leading city of Lycia in the 3rd century under the rule of Ptolemy, due to its access to the sea.

Famous names abound in its history. It’s the birthplace of St Nicholas (aka Santa), a prophet of Apollo is rumored to have lived here and it’s where St Paul boarded the ship that took him to Rome.

Today, the remains of this once prosperous maritime city and important center of Christianity play second fiddle to Patara Beach, known for its 12 miles of soft sand and gentle dunes.

Locals and tourists alike marvel at the tiny delicate white grains of crushed quartz spread out across the beach, tumbling into the sea where they’re easily visible through the crystal-clear waters.

One very special category of overseas visitors are endangered loggerhead sea turtles. Patara is one of their few breeding grounds remaining in the Mediterranean.

The turtles come every year between May and October and lay up to 100 eggs each. After covering them with sand they return to the water, leaving the next generation to their fate.

Once hatched the tiny turtles have to run a gauntlet of crabs, dogs, foxes and birds so few make it to adulthood.

Patara was designated an area for special protection back in 1990. Now there’s an abundance of bird life, plants, small wetlands and of course, that magical beach.

Kaputaş beach: Like someone cut a triangle out of the cliffs.

Seen from the air, Kaputaş Beach looks as though someone cut a triangle out of the cliffs, like a large wedge of cake.

A narrow ribbon of asphalt curves sharply around the rock face and access to the beach seems impossible. It’s only when standing on the road and looking over the edge a 187-step staircase becomes visible.

Making the descent might seem like hard work in the blazing heat but the effort to reach the bottom is well worth it. A dip in the sea, where an underground stream of cold mountain water feeds into the balmy Mediterranean, awaits. Just the tonic on a hot summer’s day.

At Büyükcakıl (Big Pebble Beach), the sometimes short, sharp rolling waves are perfect for those who like a more active beach experience.

Saltwater mixed with fresh from an underground spring breaks over the round stones forming the shore that give the beach its name.

Swimming shoes are a must and those with children take note, the stones underfoot give way abruptly to the sea.

In high season the beach is festooned with colorful umbrellas and lounging sun lovers alike. After a hard day of swimming (if you must), it’s the perfect place to watch the sun go down before heading to Kaş, just over a mile away to the west.

It’s a quintessential Turkish seaside town with a twist. Lycian tombs act as street markers, while entry to an underground water cistern with seven columns carved out of bedrock — one of only two remaining from the Hellenistic and Roman periods — is through a bar.

Çıralı beach is surrounded by history.

A long stretch of sand towards the eastern end of the Lycian Way sits in an area ringed by history.

Mount Olimpos lies to the north, the Olimpos Antique City to the south and Mount Chimaera in between. Mount Olimpos, or Tahtalı Dağı as it’s called in Turkish, was once believed to be the home of the gods.

According to Homer, it was here bad-tempered god of the sea Poseidon called up the storm that wrecked Odysseus’s ship when he was on his way home from the Trojan War.

Now a tourist site, the former city of Olimpos was once a major center of the Lycian federation, founded in the Hellenistic period.

Wall inscriptions and a sarcophagus date back to the 4th century BC, coins were minted here in the 2nd century and Cicero described it as being a city richly adorned with art and culture.

Mount Chimaera, Burning Rock or Yanartaş in Turkish, is named for small natural flames shooting up from crevices in the rocks.

They are most visible at night, but with the highest of the flames reaching around two feet high, don’t expect a massive pyrotechnic display.

Instead, marvel at the fact they’re thought to have been burning continuously for 2,500 years. Sailors used the glow of these flammable gases to navigate their ships and some say they were the inspiration for the fire-breathing Chimera in Homer’s Iliad.

This part of the coast is divided into two beaches, Olimpos and Çıralı, each with their own distinct characters.

The north end of Çıralı Beach is backed by a fertile plain lush with palm and olive trees and has a laid back vibe while the south end, called Olimpos Beach, is known for its treehouse accommodation and evening fire side parties.

Stay at only one of the beaches or try each of them in turn. Both share the same glorious expanse of water with its shimmering palette of extraordinary shades of blue.